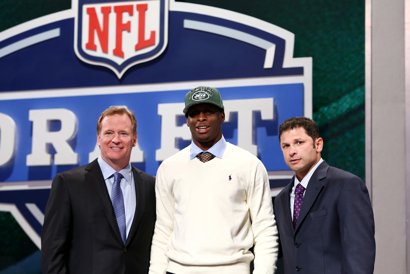 It was Wayne Chrebet’s first time walking across the NFL draft stage, as he was never drafted by the Jets or any other NFL team, but still managed to become the New York Jets 2nd all time leading receiver.  On Friday, he got to make the announcement that wind up being just what the Jets needed to turn around their franchise. Quarterback Geno Smith, who has all the right tools to lead the Jets to the playoffs and beyond.

The New York Jets added another quarterback to their depth chart Friday night, selecting former West Virginia star Geno Smith in the second round of the NFL draft, a franchise-shaking move that could mean the end for Mark Sanchez.

The Jets now have six quarterbacks on the roster — Sanchez, Smith, Tim Tebow, David Garrard, Greg McElroy and Matt Simms. In a wild twist, they may keep Tebow and cut Sanchez, league sources told ESPN NFL Insider Adam Schefter, a move that would result in a massive cap hit.

The 39th pick of the 2013 draft, Geno Smith was amazing as a three-year starter for West Virginia, throwing 42 touchdowns and only six interceptions last season. Against Baylor in a 70–63 win, he threw for 656 yards and 8 TDs with 45 completions (all three Mountaineer records), and only six incompletions. Those stats should get any football fan excited.

If you company is interested in hiring Wayne Chrebet for an appearance, speaking engagement or endorsement, contact the team at AthletePromotions.